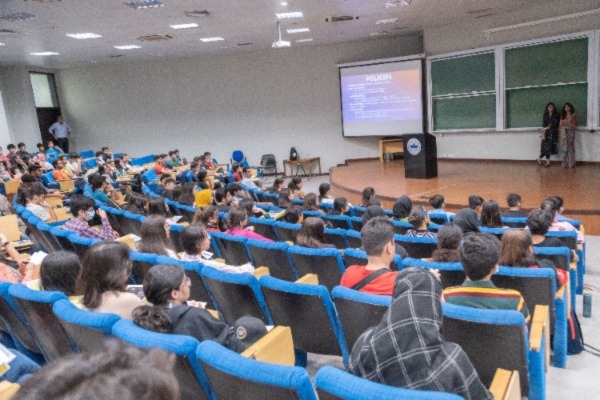 The Summer School at LUMS provides students with a platform to learn in an intellectually stimulating environment and experience the social and academic opportunities a college education has to offer. Designed for high school students, the Summer School offers courses from diverse disciplines as well as guidance regarding college applications and preparation. This year, Summer School includes courses on writing, arts, literature, and skill-building, as well as additional workshops like filmmaking and a drum circle.

The programme commenced with an orientation session where the students were welcomed to LUMS. A multitude of them made their way to SDSB and gathered in the auditorium. Before doing so, they were to receive their course packs. These course packs were a collection of course materials for the students containing all the information they needed to get through the next three weeks. It would educate them on their class schedules and what curriculum they would be following during their days as a Summer School participant. The courses will be challenging but also exhilarating. Students will find themselves completely immersed in their work and will engage themselves harder and better than ever before. Through this programme they will gain an invaluable work ethic and learn what studying on a university campus is truly like.??

Additionally, students were be given their own personal smart cards which allow them access to all the facilities that LUMS has to offer. Having a smart card is, for the students, a means to show that they are officially a part of LUMS history. To make the first experience even more memorable souvenir stalls had been set up. These stalls offered a variety of Summer School merch and keepsakes ranging from T-shirts to water bottles for the students. Since this Summer School is such a special and sought-after experience by many having something like this would serve as memorabilia for them.

As mentioned earlier, after the students had collected their course packs and smart cards they were escorted to an auditorium. Members of the CES team then proceeded to inform the students about the summer school rules and regulations and what they were to expect from the programme. The Summer School participants were told what a typical summer day for them would be like. They were told about the facilities LUMS offered such as the aquatic center, the mosque, the tennis court and on campus ATMs. The session mentioned some of the most popular dining options on campus and overall providing the students with a better understanding of what is expected of them and how to navigate this new environment.

After the brief session was concluded the students proceeded to make their way to their separate classrooms. The day was finally concluded with a fun nighttime activity. A 'Networking Night' had been organized in an attempt to get the students to socialize and mingle with one another. The night was lively and joyful with a trivia game and multiple group projects. The students had managed to expand beyond their own friend groups and step out of their comfort zones in an effort to meet new people and make new friends. To say the day had been a success was an understatement.

One of the workshops the students took part in was a filmmaking workshop. Now what is filmmaking? In a nutshell filmmaking could be described as the act of taking pictures and putting them together.